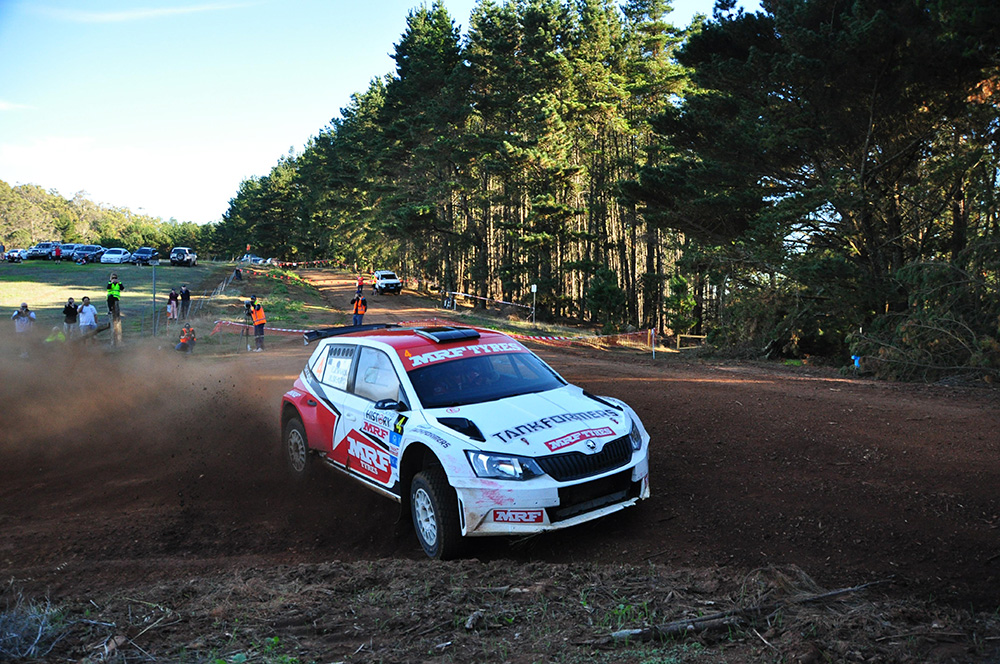 Eli Evans and Ben Searcy have continued their form from yesterday leading Heat Two of the Make Smoking Hisory Forest Rally by more than 30 seconds with three stages remaining.

Starting the day in second following the Trade Hire Busselton Long stage held last night, Evans and Searcy started where they left off yesterday gaining more than 13 seconds on the opening forest stage.

“We’ve made a few mistakes this morning but the times are still fast so we’ll try and keep it neat,” Evans said. “We’ve got a 30 second buffer so if we give away a little bit of time we’ve still got plenty up our sleeve no mistakes, it’s only a spin wide or something like that and you can lose the lead so we just have to stay focused and keep doing what we are doing,” Evans said.

Following a disappointing day yesterday the crew of Harry Bates/John McCarthy have managed to keep the pressure on Evans/Searcy for most of the day, ending the Tankformers crews streak of winning all forest stages when they won SS by 0.3 seconds.

Bates/McCarthy hold what could be considered a comfortable 17 second lead over the third placed crew of Steve Glenney/Adam Sarandis, however with three forest stages to go anything can happen.

Defending Forest Rally Champion Molly Taylor and her new co-driver Malcolm Read have consistently held fourth across the weekend and at this stage will be relying on a mishap for one of the leading crews to step into the top three of Heat Two placings.

“The results don’t tell the story of our weekend really,” Taylor said. “We changed a few things on the car before this round which didn’t quite work out as we hoped so to be honest we struggled all day yesterday to find any pace, but today we’ve gone back to how we had it at Ballarat and we’ve got the pace back so today’s been good, it’s been a good battle and it’s all pretty close so much happier with how it’s going now,” she continued.

After a bent-steering arm halted their run yesterday Adrian Coppin/Erin Kelly are currently rounding out the top five for Heat Two.

Glen Raymond/Kathryn Catford have continued their run from yesterday holding a commanding lead in the ARC 2 category. Brad Markovic/Toni Feaver sit in second and Ross Dunkerton/Lisa Dunkerton rounding out the top three.

Markovic/Feaver lost some time this morning with a crushed bonnet causing some issues for the crew over the opening stages, however they have been able to hold onto their lead in the CAMS Onslow Contracting West Australian Rally Championship.

The crews have now headed out to contest the final three stages of the event which will conclude around 3:30pm WST this afternoon.