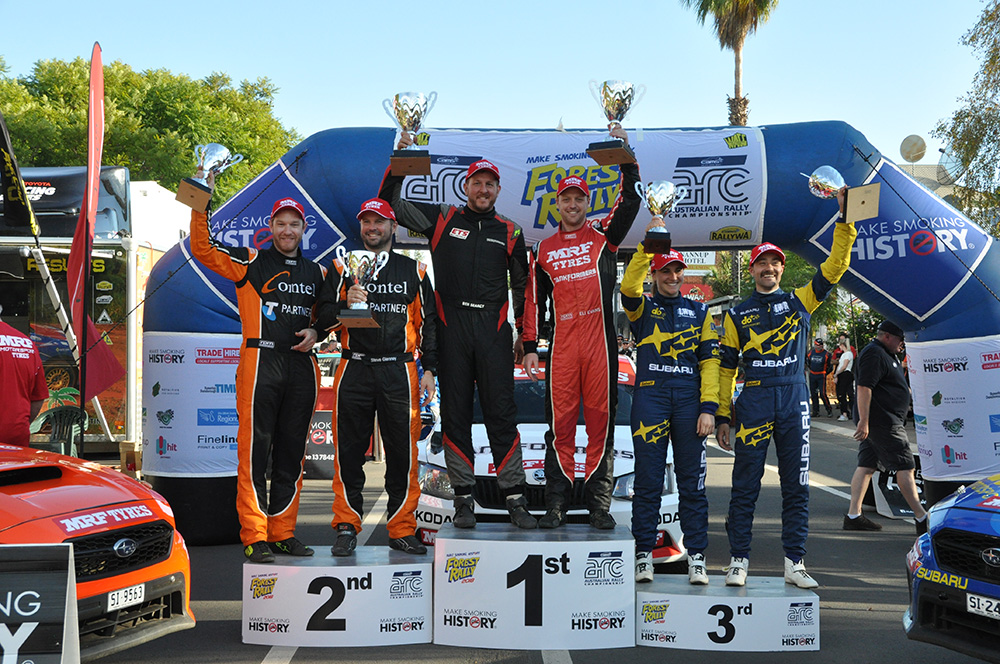 The win is the first for Evans since the Scouts Rally SA in 2015, the first for the Tankformers driver since pairing with a new co-driver Ben Searcy at the end of 2017 and provisionally puts Evans/Searcy into the ARC points lead after two rounds.

“It’s such a relief, it probably hasn’t sunk in yet until we do the champagne spray,” Evans said.

“From winning so many rallies in a row and being so successful to being two and a half years without a win it was hard and I actually did start to doubt myself, but this has given me a huge hit of confidence and excites me about the Mini Cooper at the next event and what we need it to do to beat Steve (Glenney), Harry (Bates) and Molly (Taylor),” Evans said.

“We’re not quite there yet with our car but I’m confident we can try and replicate what this Skoda R5 can do and it shows that it’s fast out there, the guys are driving fast, yeah it looked like we did it easy but Ben and I were on it all weekend,” he continued.

“This car has a completely different feel to the Mini and I was probably going the wrong way with the set up we were trying to achieve in the Mini now, so it’s something we will completely revise. We made a lot of changes before this event, hence why we couldn’t get it ready but now I’ll completely revise again and we’ll try and get some testing before we have to drive in Canberra.”

After missing half of Heat One stuck in a ditch in the middle of a stage Harry Bates/John McCarthy did their best to make up for lost points today, taking the only forest stage win off Evans/Searcy just prior to lunch, however they were unable to make a dent in the lead finishing the Heat in second abut the round in fifth.

Back in the West Australian forests for the first time in a decade Steve Glenney and his co-driver Andy Sarandis backed up their second outright placing at Tara Tasmania last weekend standing in second position on the Forest Rally podium today.

“The roads over here in Western Australia are brilliant, I love them, but they are so tricky, so much concentration is required but I guess we got away with it,” Glenney said. “You’ve just got to be so careful with every corner, every time you try to push or go wide you risk losing it so we kept it at a level that was comfortable and were able to come away with a good result,” he continued.

The car was good right through until the end, so it’s testament to the reliability of the Subaru’s as a proven product. They don’t quite have the pace of these lightweight little rocket ships but perhaps that the tortoise and the hair thing in the Championship,” Glenney continued.

The battle for the third spot on the podium came down to the final stage of the rally with Molly Taylor/Malcolm Read holding off a fight from Glen Raymond/Kathryn Catford to take the result.

“A podium was our goal coming into the rally so we are very happy to have achieved that, we just had to work very hard to get there,” Taylor said.

“The Subaru is incredibly strong and reliable and has proven it is competitive, it’s good for the championship to have so many different cars and the new evolution of cars as well and it will push us and make us stronger but as you can see at the end of the day, there are two of us on the podium so it’s testament to the WRX,” she continued.

“Yesterday was great, we kept to our plan had a great battle with Lewis (Bates), this morning we came out and had a few little issues on the opening stage of the day but we persevered, and unfortunately the car struggled a bit after that and we have really struggled to find any pace out of the car this afternoon,” Markovic said.

The crews of Mike Young/Scott Beckwith and John O’Dowd/Tom Wilde finished the WARC tied second on points at the end of the weekend.

Adding to the spectacle in the forest were the WA Clubman Masters and WA Clubman Cup series. Arguably the best entry level rally championship in Australia the Clubman competition runs over the same forest stages as the main competition but only on Saturday.

Kiel Douglas/Ross Burton won the Clubman Masters by 20 seconds ahead of Jason Lowther/Gregory Flood with Carl and Tracey Rattenbury rounding out the podium.

The event, was held in Busselton and Nannup in the South West region of Western Australia.