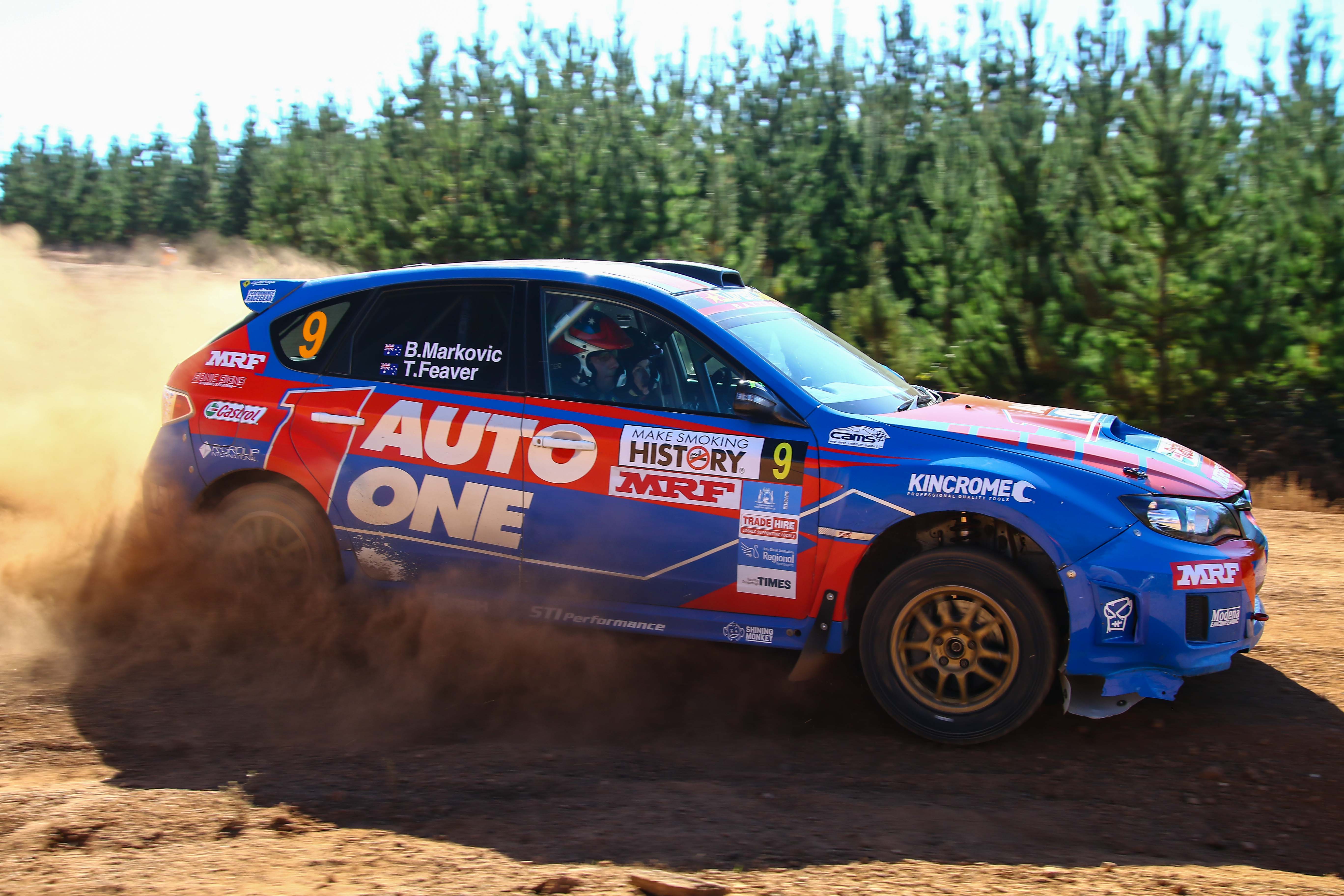 The second round of the CAMS Onslow Contracting WA Rally Championship has been run in the state’s South West this weekend with more than 30 crews contesting the Make Smoking History Forest Rally.

Maximum Motorsport’s Brad Markovic and Toni Feaver recorded a clean sweep of the event winning 13 stages and both Heats to claim a comfortable victory.

“Yesterday was great we stuck to our plan, stage times were good and we had some great battles. Today we came out and had some issues this morning but we persevered. The car struggled after that so we had to go into protection mode and didn’t get to push it too hard this afternoon, we’ve got a little bit of damage but the guys did a great job to get it back out there and we got the best result possible so that’s the main thing,” Markovic said.

“Mike (Young) and John (O’Dowd) were doing a great job today so I’m just happy to come out on the top step,” Markovic said.

“I’ve watched enough in car from what Mike does in the Asia Pacific to know how he drives and I know how well Tom went in that car last year so we had to keep an eye on our mirrors and the times today so well done to him,” he continued.

“It’s always hard when you are competing in two different championships and therefore looking at two different results but to come sixth outright for ARC and be first in the WARC is a great result,” Markovic said.

The battle for second and third position was closely fought over the entire weekend and in the end the crews of Mike Young/Scott Beckwith and John O’Dowd/Tom Wilde couldn’t be separated finishing equal second on points.

With the crews tied on points organisers were forced to come down to the total times recorded by both teams across the weekend with the crew of Young/Beckwith receiving the second place trophy and O’Dowd/Wilde the third.

Young and Beckwith topped off a great weekend finishing first outright in the WARC 2WD class.

“It’s been really good to have Scott in the car, it’s the first time we’ve worked together and he’s a local WA guy so it’s good to have him back here and he taught me a lot this weekend,” Young said.

“It’s always good to drive a car like this because it doesn’t have a lot of power but you just rev as much as you can and drive as hard as you can,” he continued.

“It’s been a fantastic weekend, Mike drove exceptionally well, drove to the plan we had and got some great results and what he did in Ellis yesterday and today was nothing short of spectacular,” Scott Beckwith said.

John O’Dowd, whilst disappointed not to stand on the second step of the podium, was happy with the result as he still comes away with great points in the WARC championship over the weekend.

“We’ve got to be happy with that (second position points), we came down to have a go at the WARC and we’ve done okay and you’ve got to keep the championship in mind,” O’Dowd said.

“Tom’s been great he’s been a good help to us and done an excellent job,” he continued.

The WARC 2WD class was won by Young/Beckwith with Razvan Vlad/Daymon Nicoli in second and John Ludlam and James Marquet in third.

The WARC crews will next contest the MRF Tyres Boddington Safari on June 3.

The event, was held in Busselton and Nannup in the South West region of Western Australia.