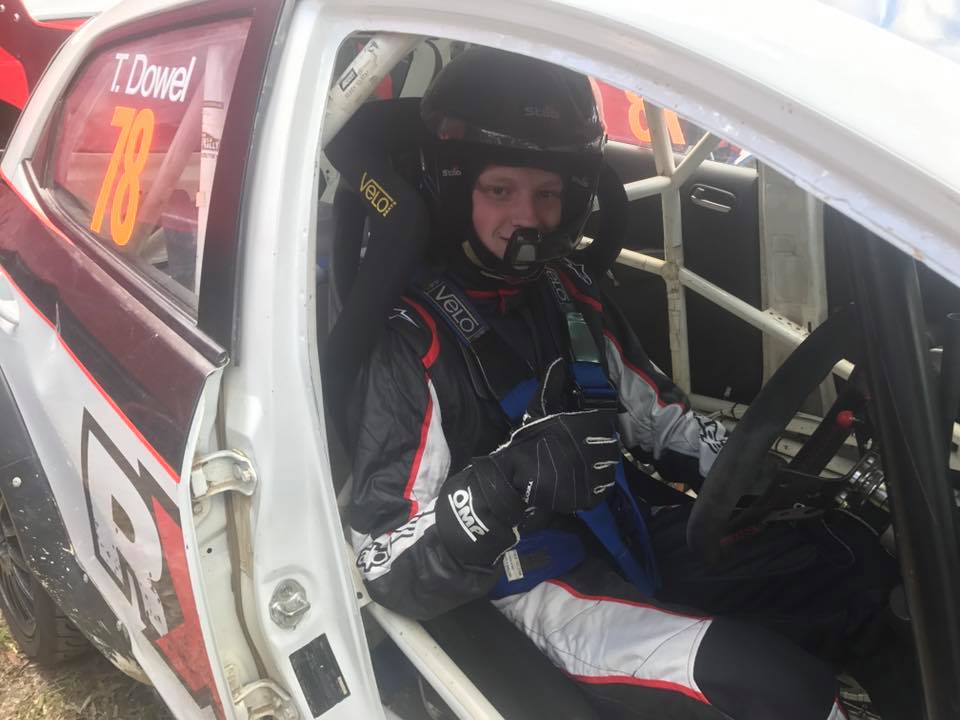 An inspirational turn of events has seen a change in the Make Smoking History Forest Rally entry list with exciting young competitor Troy Dowel, to replace his father – and 2011 Australian Rally Champion Justin Dowel – in the event this weekend.

Dowel, now 18, was diagnosed with Acute Leukaemia while in Ireland in 2018 ahead of the fourth round of the RX Academy in Finland. In November, he received encouraging news that his leukaemia was in remission and he set a goal to return to racing in the first half of this year.

A break in his chemotherapy treatment presented Dowel with an opportunity to make that dream a reality and just last week he completed 100km of testing in the Up & Go G4 Rally car in a bid to successfully prove his fitness for the Make Smoking History Forest Rally.

Considering he hadn’t driven since August last year, and in the meantime had undergone an intense chemotherapy treatment plan, it was vital that Dowel prove he was able to handle the intense effort that comes with driving under the tough conditions rallying presents.

On Tuesday Dowel received medical clearance from the Confederation of Australian Motorsport and he will now make the trek over to Western Australia to contest the rally against the best drivers in the country.

“My dad, Justin, was originally entered in the event but there was a break in my chemo treatment that coincided with the rally and we just knew we had to go for it and give it a crack,” Troy Dowel said.

“I have a further 10 weeks of intestive chemotherapy when I get back home to Victoria and then I hope I can continue to rebuild my racing career and contest more rounds of the Australian Rally Championship,” he continued.

Dad Justin Dowel said the opportunity to put Troy back in a car was too good to miss, even if it meant giving up his spot in the car for the event.

“The aim for this weekend is for Troy to finish the rally – not an easy task for any driver over here in WA – for him to learn to write notes from scratch and hopefully for him and co-driver Simon Elis to progressively build up his speed stage by stage,” Justin Dowel said.

“To be in the position to compete in his first rally mid-treatment is a huge task, but it is testament to Troy’s strength and commitment to getting his racing career back on track and I can’t wait to see him out there,” he continued.

“Troy is an inspirational young man, who was dealt an incredibly difficult hand when he was just starting to show his true potential as a driver,” Make Smoking History Forest Rally Clerk of Course John Gibbons said.

“The entire rally community is excited to see Troy get back out in the forest and we can’t wait to welcome him to Western Australia and the Make Smoking History Forest Rally this week,” Gibbons continued.

It will be the first time the teenager has contested the West Australian event which is renowned for its marble surface which keeps even the most experienced driver on the edge of their seat.

“Will Orders, Pat, Tim, Matt and Ben have done a brilliant job converting the car from full rallycross spec to fit in the G4 regulations,” Troy Dowel said. “I also want to thank Travice from Oz Staff and Up&Go for their continued support.”

The Make Smoking History Forest Rally will be held in Busselton and Nannup in WA’s Southwest from the 5 – 7 April and is the opening round of the CAMS Australian Rally Championship.