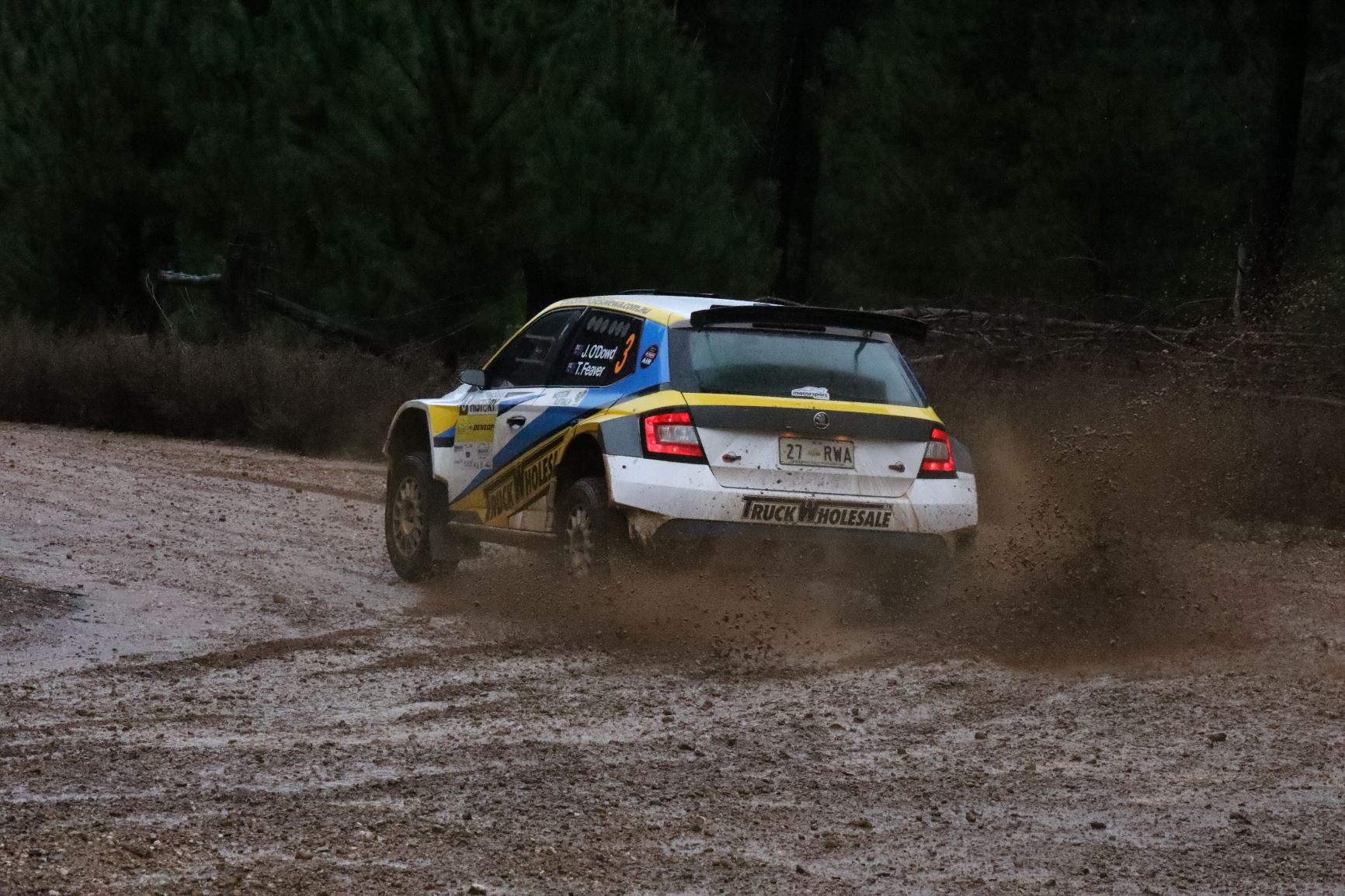 John O’Dowd and Toni Feaver conquered the precarious conditions and held off their rally rivals to cross the finish line of the Make Smoking History Forest Rally with an outright win.

After missing out on the top podium place last year by a mere half a second, O’Dowd and Feaver in the Skoda Fabia R5 were determined that history would not repeat. The duo held off a charging Ben Searcy and Daymon Nicoli in the Mitsubishi Evo 9 and claimed the outright win.

O’Dowd said the close competition between the top teams had been an enjoyable part of the event.

“First two stages were good today, and then the rain came,” said O’Dowd. “But, we managed to hold it together to earn some good points.”

“We’re fighting for a Championship. Ben and Craig have done a fantastic job, so it will be a good year if they keep driving the way they are driving.

“You want to win it by small margins, not big ones – so it’s good for everyone. That’s good racing!

“Toni and I have been in the car together for three years, and we’re working beautifully together. She’s been a fantastic help writing the notes and helping me with them – all I’ve got to do is try and commit to them, which is the hard part.

“The Fabia R5 is not a car that you can say ‘I’ll take it easy here’ because it’s not designed for that. So, you’ve got to be on it and get in late with the braking, get the car squatted down, get the diff working and go! That’s hard to do when you’re going flat out into a wet, slippery corner that’s just been rained on before you get there – you don’t know what it’s going to be like.”

Despite missing out on the outright win, Ben Searcy and Daymon Nicoli’s comeback from 24th place on Friday to finish the event in second place, was a competition highlight that will likely be a talking point in the local rally scene many years to come.

Searcy said the team found the conditions for the final Heat a bit of a mixed bag.

“Brockman and Folly were awesome, and we had much more grip than I expected to have after last night,” said Searcy. “Then following stages were a bit rocky and a bit loose. But the last stage was like driving through the Swan River!

“We’re really happy to grab a whole bag of Championship points today – that was the main thing.”

Rando pointed out that the harsh rallying conditions this weekend made finishing an achievement in itself.

“I don’t know what sort of car would be best here,” said Rando. “It was tricky no matter what you had.

“After yesterday, we had a good push through those really wet conditions and it paid off. We got a bit of time back. But if you kept it on the road in this event, you did well.”

It was only the second event for Rookie Championship leader Ali Aslam, but he and co-driver Michael Wood clinched a Top 10 finish in the Subaru WRX STi and finished with just over a five minute gap to the leaders.

“Forest was a different experience to Baker’s Hill – faster over the blind crests and slipperier as well,” said Aslam.

“We had a bit of a mishap on the second stage yesterday, but other than that, it was all good. Everything was under control.

“The car performed well – thank you to my dad and the service crew. They’ve done all the hard work, and we’ll be setting it up for the next one.

“Our main purpose this year is just to finish all the events, and then once we get more experience, we can build up more and more.”

The 2WD competitors particularly felt the slippery conditions. Just over half of the category’s starters crossed the finish line.

Glenn Alcorn and Jonathan Charlesson won yesterday’s Heat and things were looking good for the pair until the diff on their Ford Escort RS let go on the first stage of the day.

A close battle between Mark Travers and Jeremy Edwards in the Toyota AE86 Sprinter and Alex and Lisa White in the Nissan S13 unfolded, with both teams taking a couple of stage wins each.

In the end, it was Travers and Edwards that emerged victorious, claiming the top spot on the 2WD podium.

Travers said the car had been solid over the weekend.

“We’ve fully rebuilt the car over the past three years, and it’s amazing what little things we thought we had right, just haven’t been right in the past,” said Travers. “But, this weekend there’s been no dramas at all.”

“It’s a long event and the weather played a big part yesterday, but our last rally event was torrential rain as well. We enjoyed it I think.”

The Whites crossed the finish line with less than a minute gap, while David Farnworth and Tim Jackson  in the Toyota Carolla FX-GT took the third spot on the podium.

WARC competitors now turn their attention to preparing for their next round. The Safari Rally will be the third round of the WA Rally Championship and Clubman Cup, and will be held in the Jarrahdale region on June 19.

To see the full results for the 2021 Make Smoking History Forest Rally please see the results page of the Forest Rally website.