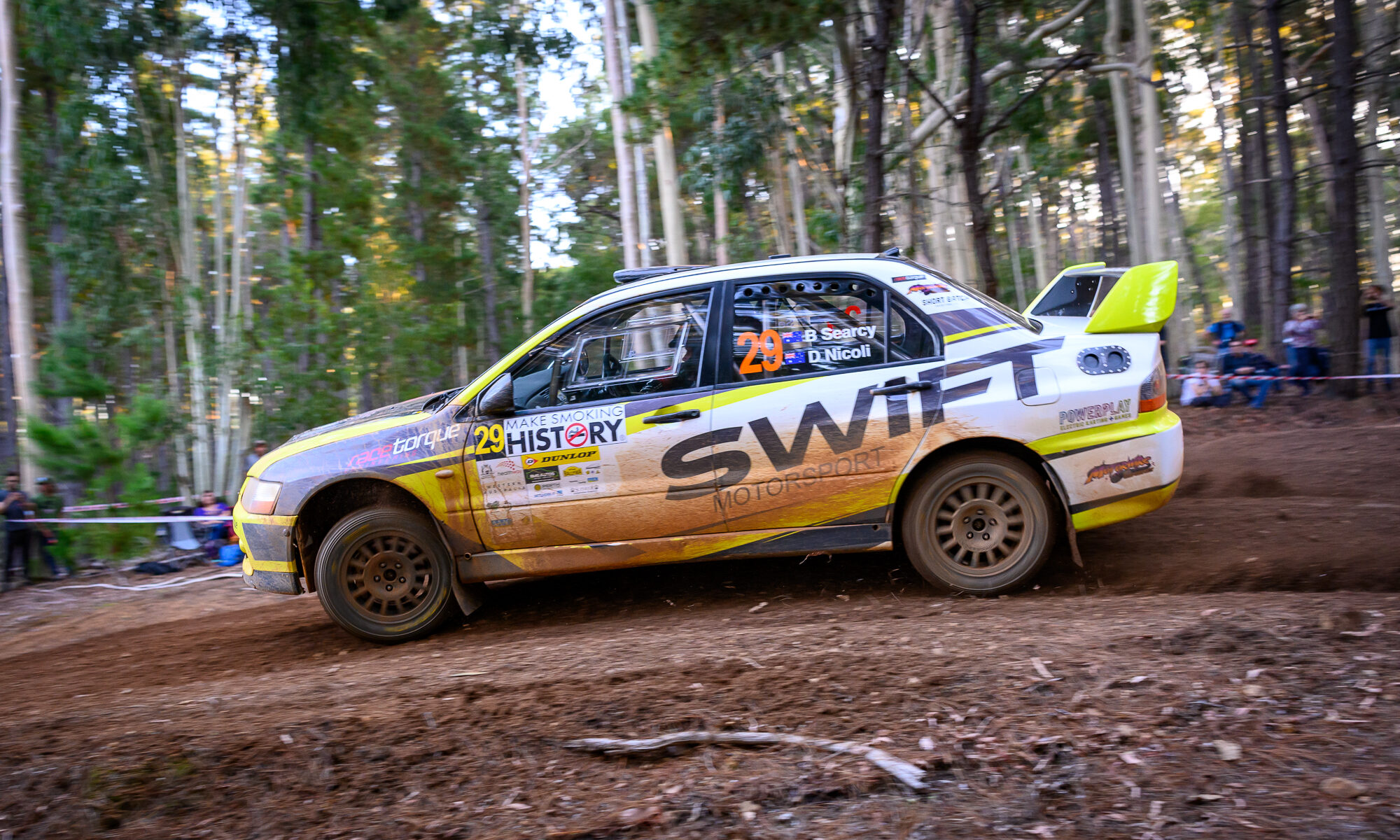 After a three-year hiatus due to pandemic-closed Western Australian borders, interstate rally drivers were welcomed back for the Make Smoking History Forest Rally held on the weekend in Bunbury and Nannup (20-22 May 2022).

Split into two heats, teams scored points after each heat according to where they placed, and the team with the most points across both heats, wins.

Harry Bates and John McCarthy in a Toyota GR Yaris AP4 produced a mighty effort to climb their way up the order after a number of setbacks including a fuel pump issue, a puncture, and an 80-second penalty for late check in.

It was the misfortune of Eli Evans and Adam Wright – their Mini Cooper AP4 caught fire at the end Stage 12, forcing them to retire – that put Bates and McCarthy in the lead, which is where they stayed to take the outright win.

Full results of the ARC can be found here.

Ben Searcy in his 2006 Mitsubishi Lancer Evo 9 was elated to take his maiden victory.

Searcy, with co-driver Damon Nicoli, had a few issues, but persevered, taking a stage win, finishing five stages second fastest, and the remaining stages in the top six.

“To finally get a first outright in the State Championship is amazing, we’ve tried over many years, and to finally crack it, and in some really tough conditions, is just awesome,” Searcy said.

“We had some boost issues in the first heat which lost us a lot of power, so we had to come out on the second day and show what we could do.”

Searcy came out firing on the first stage of Heat 2, to take the WARC lead by 11 seconds which was enough to keep ahead of Craig Rando and Scott Beckwith in their 2002 Subaru Impreza WRX STI who were nipping at their heels for the remaining four stages.

Rando and Beckwith won three of the 17 stages to finish on the podium in second place.

Rookie driver Daniel Gonzalez with co-driver Caleb Ash were consistently faster after each stage and finished impressively in third outright in their 2018 Hyundai i20N.

“The biggest goal was to do every stage, every kilometre, and not mark the car, and learn as much as we could, and we achieved that, it was absolutely brilliant,” said Gonzalez.

Heat 1 was dominated by 17-year-old Max McRae and co-driver Mac Kierans in their 2009 Subaru Impreza WRX STI, the duo fastest on seven of the 12 stages to finish the day with a 20-second lead over Rando and Beckwith.

In Heat 2, McRae had an off on the second stage, and while it didn’t end his rally, he lost too much time to be in contention for a podium place. He recovered well, pushed hard, winning two more stages to finish in fourth place outright.

Full results of the WARC can be found here.

Glenn Alcorn and Jonathan Charlesson set a blistering pace from start to finish, winning all but four stages in a 2WD 1980 Ford Escort RS to take the WARC 2WD title.

The weekend wasn’t without dramas, a clutch issue almost ending their rally but Alcorn and Charlesson were able to hang on.

“On the last stage of the first heat, I drove the last six kilometres on full throttle, the cable was stuck, and it ended up damaging the clutch, which kept slipping after that. Then we lost the clutch completely in the last three stages of the rally,” Alcorn said.

“It was hard work, we didn’t think we’d get through, but when the car was going, we pushed hard trying to make up lost time.

“Jonathan did an excellent job on the notes and kept me calm, and the service crew did a great job as usual, and my sponsors too.”

Finishing in equal second place was Gary Mills and Mitch Gray in their 2005 Ford Fiesta, and Alex and Lisa White in their 1989 Nissan Silvia S13.

The WA Clubman Cup and Clubman Masters competitors competed in Heat 1 only, 12 stages and a total of 121 competitive kilometres.  It is designed to make rallying accessible for competitors not able to commit the time and budget to do longer events.

Winning seven of the 12 stages to take a convincing outright win in the Clubman Cup was Hayden Wright with co-driver Adam Wright in their 1998 Hyundai Excel.  The duo finished 53 seconds ahead of Damien Cadoux and Gaetan Taglialatela in their 2007 Mitsubishi Lancer, and finishing in third place, a further 8 seconds behind, was Michael Connore and Eden Hughes in their 1999 Hyundai Excel.

In the Clubman Masters, rally veteran Andy van Kann and co-driver Catherine Saayman won every stage in their 1974 Toyota Corolla TE27 to take the title 5:30 minutes ahead of Carter Smith and Lachlan White in their 1999 Hyundai Excel.